Uniform at Carronhill School sets a standard and also presents a high image of the
school in the local community. 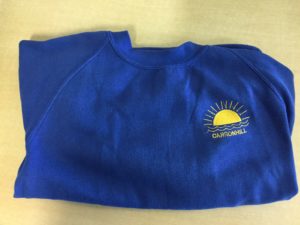 Pupils in the Primary classes have a school uniform which consists of a royal blue sweatshirt, a white polo shirt and dark trousers or skirts. 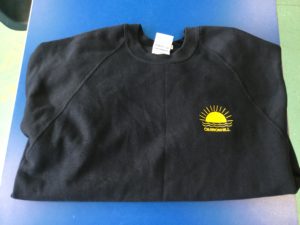 Pupils in the Secondary classes have a uniform which consists of a navy blue sweatshirt, a white polo shirt and dark trousers or skirts.

Pupils on blended placements are encouraged to wear the uniform of the other
school on the days they attend there.

Considering the changeable nature of weather conditions pupils should have
appropriate outerwear and footwear.

Staff at Carronhill School aim to support the pupils to be as independent as possible
and therefore request that parents dress their children in clothes which allow for ease
of movement and enable pupils to help with dressing where appropriate.

Parents should note their responsibility to ensure all clothing and belongings brought
to school are named or marked in some way as it is difficult for children to distinguish
their own clothing from that of others.